While this series has gotten better as it’s gone along, we all know this hasn’t been my favourite series. I even had a little break between King’s Cage and War Storm. But would the series finish on a high note, or continue in the same vain? 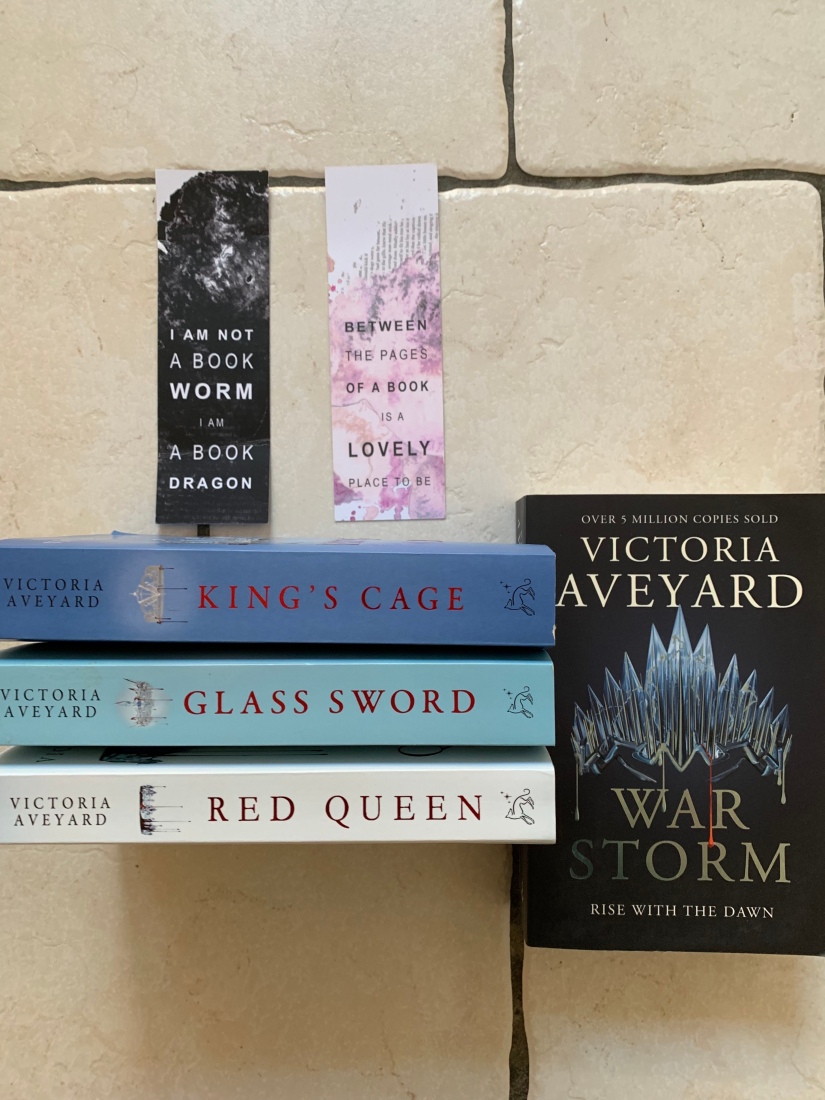 Mare Barrow learned this all too well when Cal’s betrayal nearly destroyed her. Now determined to protect her heart – and secure freedom for Reds and newbloods like her – Mare resolves to overthrow the kingdom of Norta once and for all… starting with the crown on Maven’s head. But not battle is won alone, and before the Reds May rise as one. Mare must side with the boy who broke her heart in order to defeat the boy who almost broke her. Cal’s powerful Silver allies, alongside Mare and the Scarlet Guard, prove a formidable force. But Maven is driven by obsession so deep, he will stop at nothing to have Mare as his own again, even if it means demolishing everything – and everyone- in his path. War is coming, and all Mare has fought for hangs in the balance. Will victory be enough to topple the Silver kingdoms? Or will the little lightning girl be forever silenced?

‘ I can almost trick myself into thinking she’s alive. Sitting next to me instead of trapped in a book. But mostly I feel a deep ache. Hunger for her. Sorrow. Regret.’

This was the best book in the series by a long shot. It was everything I wanted the other books to be, what they needed to be. War Storm was dynamic, intriguing, romantic and complex.

The plot captured me right from the beginning. There’s been parts of the other booking that were uninteresting, even boring but this wasn’t like that. From the epic battles, which were so engaging, to the scenes were the characters were plotting the battles, were evening interesting. The dynamics between the characters really made them shine.

I even started to believe in the romance between Mare and Cal. After having both gone there separate way at the end of King’s Cage, I was really willing them to reunite. I could feel the tension between them, the longing. It gave this book a bit of heart.

I can’t believe I’m actually going to type this, but Mare Barrows actually became likeable. I’m in shock. While she was still complex, she lost her annoying qualities like the whining. In the previous books, I didn’t care what happened to her, but this one I actually found myself rooting for her. I’m sure the romance between her and Cal helped her like-ability, but hey whatever works.

The writing was so much better in this book. The action leapt off the page, with the battles being suspenseful. The dynamics between the characters were a real highlight. Victoria made such a wise decision to tell the story through different characters perspectives. I think it should have been like this from book one. I loved Mavens and Iris’s chapters. Although I would’ve like to read from Farley’s point of view. And what happened to Cameron? She went from being a main character to barely mentioned.

Can we talk about Evangeline? Now this was character development. She went from being the token rival to Mare to the star of the books. I love her. She was brave, tough, heartfelt. Her chapters were a joy to read. How she chose her own future over the one her father planned for her, even though it had some bad repercussions was inspiring. Her and Elane’s romance was the best thing about this book. I’m so glad she got her happy ending.

Now, speaking of endings. The way this book ended was laughable. It genuinely made me laugh out loud. I thought the ending was going to be shocking and explosive but it just sort of fizzled out. Nothing was resolved. The books called War Storm, there’s a big war at the end, yet all characters just decided to continue it another time. It certainly didn’t feel like a series ending. It felt like there might be another book, but please book gods, don’t do that to me.

What did you guys think of this book? Or that ending? Or the series as a whole. Comment and let me know…