This is the 12th book in the ‘Last Kingdom’ series by Bernard Cornwell and I’m thrilled to be on the blog tour.

Uhtred of Bebbanburg is a man of his word. An oath bound him to King Alfred. An oath bound him to Æthelflaed. And now an oath will wrench him away from the ancestral home he fought so hard to regain. For Uhtred has sworn that on King Edward’s death, he will kill two men. And now Edward is dying. A violent attack drives Uhtred south with a small band of warriors, and headlong into the battle for kingship. Plunged into a world of shifting and alliances and uncertain loyalties, he will need all his strength and guile to overcome the fiercest warrior of them all. As two opposing Kings gather their armies, fate drags Uhtred to London, and a struggle for control that must leave one King victorious, and one dead. But fate – as Uhtred has learned to his cost – is inexorable. Wyrd bid ful ãræd. And Uhtred’s destiny is to stand at the heart of the shield wall once again… 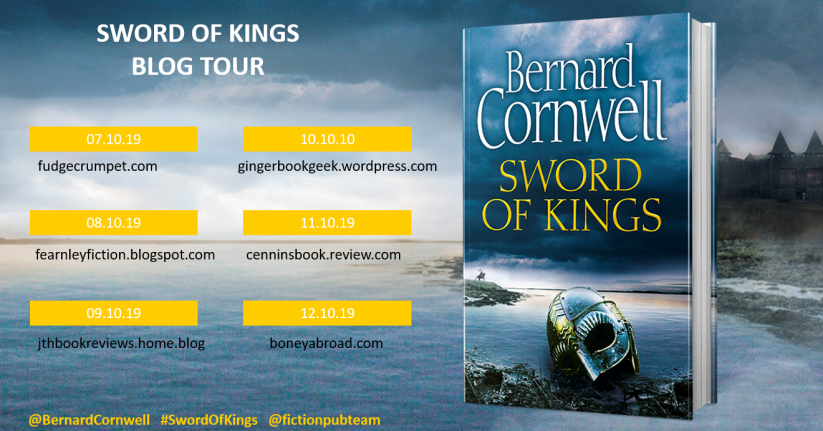 As I said before, this is the 12th book in the series and I have to be honest and say I haven’t read the previous eleven. But I can gladly say it doesn’t matter, as I was able to get into the book and more importantly I didn’t feel like I was missing anything and I throughly enjoyed it.

This really was a fantastic historical fiction. It was full of little, intricate details that really made the novel really shine. I loved the period of history the story took place in, with all the different names for places in England, and the different armies and the conflict it created. It made it so interesting and you knew exactly when the book was set.

Uhtred was a great character to follow. He was loyal, strong and fierce and I was so intrigued throughout to see if he would complete his mission and keep his oath. He was a brilliant anchor to have throughout the book and the series. You just wanted Uhtred to succeed. Even when he was captured he still had a dignity about him and the I couldn’t wait to see if he got his revenge. Bernard Cornwell really knows how to craft great characters.

The story was brilliant. It was well paced yet different lose its finer details. I even especially enjoyed the minor plot of Bernadette seeking revenge over her old slaver, it was fantastic. A times it even felt a tad like a spy novel to me, with the some of story. It was filled with some great action sequences, especially those ones on the ocean, you don’t read them often in books and these ones were so well written.The action begins quite early on in the book and the story takes off from there and doesn’t settle down till the end of the book. Fantastic.

I highly recommend this well written, action packed historical fiction book, that has been researched meticulously. Read it regardless of wether you’ve read the previous books or not. Do not miss this one.

Thank you to HarperCollins for gifting me with a copy of this book in return for an honest, unbiased review. This book is out now.